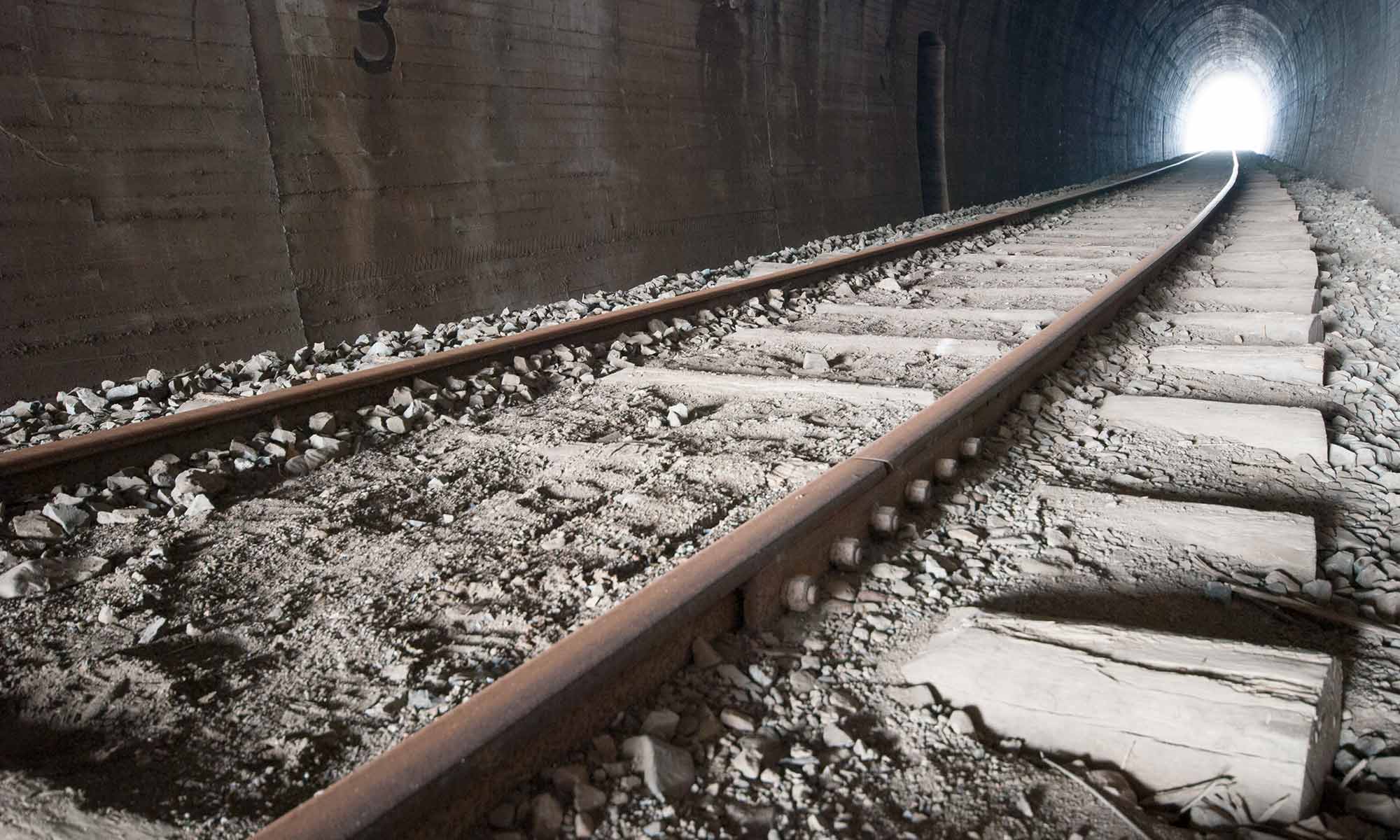 We think it is!

Any contact I’ve had with state politicians and both councils has been positive. They want to work towards a good resolution.

In 2008 I walked the tunnels with a good mate, and took some photos. At that time, to all intents and purposes it appeared QR had abandoned the corridor.

Today, Queensland Rail advises that they are on private (state owned) property.

Walking the tunnels is an experience. It draws you into the past.

It makes you wonder about what it would have been like to be there when the tunnels were built. There is more information and photos about the tunnels here.

I believe most of the work was done by hand, and the workforce must have had skilled engineers providing direction.

While they would have used explosives, it must have been incredibly difficult and hard work with a pick and shovel.

Details attract your eye – the outline of the boards in the concrete that were used as boxing when the concrete was poured leads you to think about mixing that concrete.

No phone call to the batching plant in Gladstone to deliver a mix in those days.

It is a fair distance from water, so that had to be carted up rough tracks, along with gravel and sand sourced locally. It had to be good clean stuff as well or the concrete wouldn’t last. 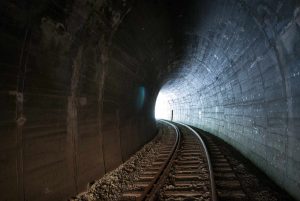 Wall detail in a tunnel. Click for full size.

The sleepers you are walking on have a round top. How unusual! These are genuine hog-backs, hand hewn from the hard dense iron bark trees growing on these stony spurs.

The trees would have been many decades, perhaps 100’s of years old, only growing a millimetre or two each year on these  hard hills.

Your experience is really enhanced when you realize the sleepers are original, almost 100 years old.

They have lasted because of the quality of the timber, and because they are protected from the weather in the tunnels. The truly remarkable thing is that the dog spikes which hold the rail down to the sleeper have kept their grip in the wood all this time, even with the vibration and shaking of the trains on the track.

The best historical tourism is when the tourist can experience, and wonder about the past.

The term ‘hog-back’ refers to the round shape of the top of the sleepers, this being the outside of the tree. The tree would have been felled somewhere near the rail line with a crosscut saw. 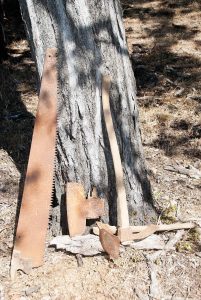 One man crosscut saw, a broad axe sans handle and two adze. These, along with a sledge hammer and wedges provided the basic tools to split and dress hogbacks.

They were split from the tree using wedges, and dressed with broad axe and adze. The bed for the rail line is cut into the top of the sleeper with an adze.

I cannot pin down a date, but going forward sleepers were generally sawn in a sawmill or in the bush using law saws.

Sawing sleepers was a busy industry in the Boyne Valley, and in many districts in the forest country of Queensland, until about 2000.

It was mostly done by self employed people, and provided a good outlet for timber on grazing properties. In times of drought or poor cattle prices it provided a good second income stream. 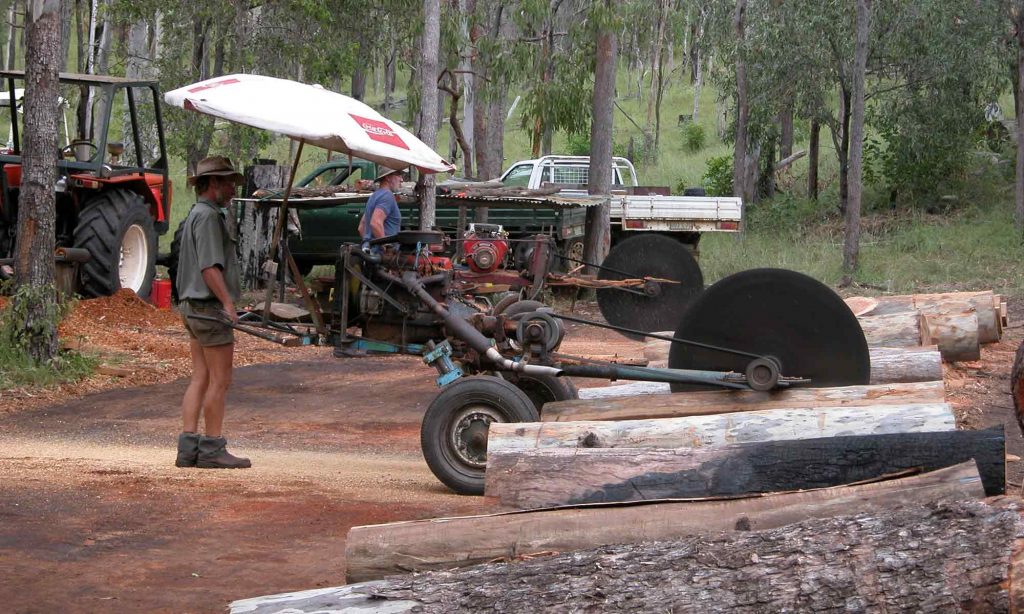 ‘The train’ was an integral part of the communities along the corridor.

From Many Peaks ore sent to Mt. Morgan , timber sent from the sawmills, cream to the butter factory,  beef cattle to meatworks, pigs to market, groceries and supplies back to the local stores, children off to boarding school and passenger services to the bigger towns, many things revolved around the train.

This all helps explain why the local communities place such importance on the rail, its sleepers and history. 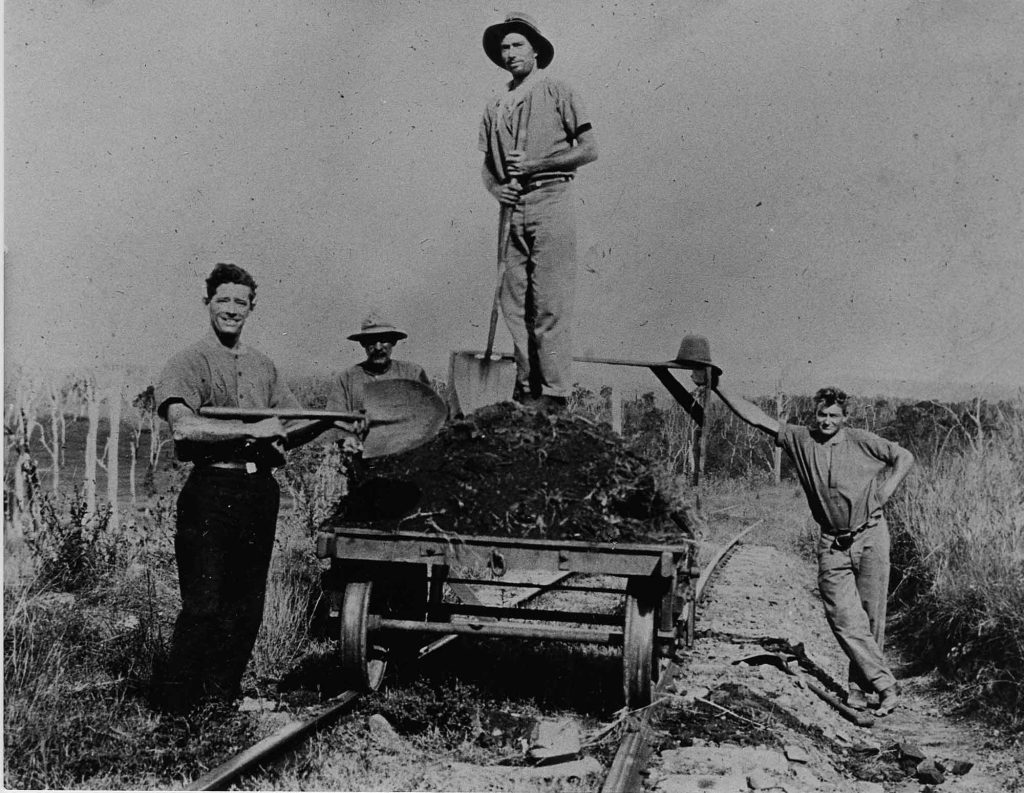 They called it “playing the banjo”

Apart from the significant numbers of people working on the rail as fettlers ( there were, I think, four gangs in the Valley) and station managers, there were many people involved in cutting sleepers or using the train services in their daily lives.

It does not explain the reaction of people walking the tunnels who have had no association with the rail corridor. The interest in, and enhanced experience of seeing the hogbacks in place is remarkable.

Leaving these hog-backs in place would would  leave a testament to a society and people who lived along the corridor and a way of life now gone.

It would be the only place rail and hogback sleepers are preserved on any of the disused rail corridors in the state, and is one of the most interesting places to do so.

Not leaving some of the original sleepers and track in place will leave a hollow, empty experience in those tunnels.

The interest in the tunnels and hogback sleepers has just happened, spread by word of mouth, especially over the past few decades. No doubt social media has played a part. Perhaps QR needs to put up a few signs advising it is private property for the moment.

It is important to preserve the past at a local level.  In the end it is the best way to showcase our combined history & culture. However, it is just as important to look forward.

The experience of walking these tunnels with these hog-backs and rail in place could provide a great tourist attraction for the future.

What do you think? Have your say in the comments below.

22 Replies to “Is preserving rail and hogbacks in the Boyne Burnett Tunnels and bridges along the corridor important?”